In this blog, I will try to explain heavy metals toxins and how they cause candida. I will give examples of how homeopathy can help to rebalance.

What is the link between Candida and heavy metals?
Heavy metals are often the underlying cause of Candida overgrowth. The body uses candida to bind with those toxic elements as it is safer to have them that way. You can’t deal permanently with the overgrowth until you have the toxic metals in your body.

What are the heavy metal toxins?
Heavy metals are those metals that possess a specific density of more than 5 g/cm3. These metals are essential to maintain various biochemical and physiological functions in living organisms when in very low concentrations. However, they become toxic when they exceed certain threshold concentrations. Although it is acknowledged that heavy metals have many adverse health effects and last for a long period of time, heavy metal exposure is increasing.
Metal toxicity depends upon the absorbed dose, the route of exposure and duration of exposure. This can lead to various disorders and result in excessive damage due to oxidative stress induced by free radical formation.
35 metals are of concern for us because of residential or occupational exposure. Out of which 23 are heavy metals: antimony, arsenic, bismuth, cadmium, cerium, chromium, cobalt, copper, gallium, gold, iron, lead, manganese, mercury, nickel, platinum, silver, tellurium, thallium, tin, uranium, vanadium, and zinc. These heavy metals are commonly found in the environment and diet. They are required to maintain good health in small amounts, but they can become toxic or dangerous in larger amounts.

Symptoms of heavy metal toxicity
Heavy metal toxicity can lower energy levels and damage the functioning of the brain, lungs, kidney, liver, blood composition, gastrointestinal system, and cause candida overgrowth. Long-term exposure can gradually progress physical, muscular, and neurological degenerative processes that imitate diseases such as multiple sclerosis, Parkinson’s disease, Alzheimer’s disease, and muscular dystrophy. Repeated long-term exposure to some metals and their compounds may cause cancer. More about heavy metals you can read here.

If you want to learn more, book a 15 min free appointment now.

Arsenic
Arsenic is one of the most important heavy metals causing disquiet from both ecological and individual health standpoints. It has a semimetallic property, is prominently toxic and carcinogenic, and is extensively available in the form of oxides or sulfides or as a salt of iron, sodium, calcium, copper. Arsenic is the twentieth most abundant element on earth, and its inorganic forms, such as arsenite and arsenate compounds, are lethal to the environment and living creatures. 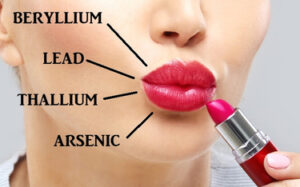 Lead
Lead is a highly toxic metal whose widespread use has caused extensive environmental contamination and health problems. The sources of lead exposure include mainly industrial processes, food and smoking, drinking water and domestic sources. The sources of lead were gasoline and house paint, which has been extended to lead bullets, plumbing pipes, pewter pitchers, storage batteries, toys, and faucets. More than 100 to 200,000 tons of lead per year is being released from vehicle exhausts in the US. Some are taken up by plants, fixation to soil and flow into water bodies. Hence human exposure to lead in the general population is either due to food or drinking water. Lead is an extremely toxic heavy metal that disturbs various plant physiological processes, and unlike other metals, it does not have any biological functions.

Mercury
Metallic mercury is a naturally occurring metal. Mercury is very toxic and exceedingly bioaccumulative.
Major sources of mercury pollution include agriculture, municipal wastewater discharges, mining, incineration, and discharges of industrial wastewater.
Mercury is present widely in water resources such as lakes, rivers, and oceans, where they are taken up by the microorganisms and get transformed into methyl mercury within the microorganism. Consumption of this contaminated aquatic animal is the major route of human exposure to methyl mercury. Mercury is extensively used in thermometers, barometers, pyrometers, hydrometers, mercury arc lamps, fluorescent lamps, and catalysts. It is also being used in pulp and paper industries, as a component of batteries and in dental preparations such as amalgams, in vaccines.
The brain remains the target organ for mercury, yet it can impair any organ and malfunction nerves, kidneys, and muscles.

Cadmium
Cadmium is the seventh most toxic element as per ATSDR ranking. It is a by-product of zinc production, which humans or animals may get exposed to at work or in the environment. Once this metal gets absorbed by humans, it will accumulate inside the body throughout life.
Cadmium is being used in rechargeable batteries for special alloy production and is also present in tobacco smoke. About three-fourths of cadmium is used in alkaline batteries as an electrode component. The remaining part is used in coatings, pigments, and platings and as a plastic stabilizer. People may get exposed to this metal primarily by inhalation and ingestion and can suffer from acute and chronic intoxications. Cadmium distributed in the environment will remain in soils and sediments for several decades. Plants gradually take up these metals, which get accumulated and concentrate along the food chain, ultimately reaching the human body.

Chromium
Chromium is the seventh most abundant element on earth. It occurs naturally by the burning of oil and coal.
Chromium is extensively used in industries such as metallurgy, electroplating, production of paints and pigments, tanning, wood preservation, chemical production, and pulp and paper production. These industries play a major role in chromium pollution with an adverse effect on biological and ecological species. Because of its mutagenic properties, the International Agency for the Research on Cancer, Cr(VI) is categorized as a group 1 human carcinogen.

Aluminium
Aluminium is the third most abundant element found in the earth’s crust. Aluminium interferes with most physical and cellular processes.
The greatest complications of aluminium toxicity are neuro-toxicity effects.
The main routes of aluminium contamination by humans are through inhalation, ingestion and dermal contact. Sources of exposure are drinking water, food, beverages, and aluminium containing drugs. Aluminium is naturally present in food.
Symptoms that indicate higher amounts of aluminium are nausea, mouth ulcers, skin ulcers, skin rashes, vomiting, diarrhoea, and arthritic pain.
Aluminium has adverse effects on the nervous system and results in a loss of memory, balance problems, and coordination loss.
How do you know if you have heavy metal toxins?

We can have an educated guess by looking at the symptoms and linking them with the possible exposure. You can have a hair mineral analysis, and it will show if you have accumulated toxic elements. This is an accurate method of testing.

How to detox from heavy metals?

You could try different methods of detox. I use a homeopathic detox. You can detox one single metal or a combination of metals at once, depending on your needs. Homeopathy is a safe, gentle and effective method of detox. The course usually takes 8 weeks and has to be supervised by a qualified practitioner. I advise my patients to take Zink and Selenium as supplements during the time of detox. This is to aid the excretion of the toxins from the body. Depending on the case, organ support for the kidney and liver is something that can be considered. This is done using homeopathic remedies in low potencies taken daily while the detox is ongoing. There is a hierarchy in detoxing. Some detoxes can be combined. This is done to be more effective and to prevent any undesirable reactions.

If you want to learn more, book a 15 min free appointment now.

Disclaimer
This article is for educational purposes only and not intended to replace the advice of your physician or health care provider.