Homeopathy for nausea during menopause

Homeopathy can be used to relieve nausea successfully. It is a holistic and natural form of medicine. Homeopathy is free from side effects and safe to use at any period of life.

Nausea can be extremely unpleasant. Many people do not realise that it can be a symptom of menopause. Nausea most often occurs during the peri-menopause, and the symptom is usually at its worst in the morning. Other PMS-like symptoms can accompany it.

Nausea is an uncomfortable feeling, usually in the upper stomach, characterised by an urge to vomit. Although this feeling usually precedes vomiting, this is not always the case during menopause.

Nausea may also be a side effect of HRT or other medications. If this is the case, you may consider talking with your GP.

Book 15 minutes free now to find how homeopathy can help you.

Why does menopause cause nausea?

Although the exact link between menopause and nausea is not yet fully understood, it is thought that a change in hormone levels causes the symptom. Similar to pregnancy causing morning sickness, menopause is a time of our life when our hormones are radically fluctuating, in particular, the hormones oestrogen and progesterone.

Some general tips include trying to eat small amounts regularly as low blood sugar may worsen symptoms. Taking Ginger in some form, such as chewing on a slice of fresh or dried ginger, drinking a ginger flavoured tea may be helpful.

Here are some of the remedies most often used for treating nausea. They should be tried in a 30c potency every 4 hours until some relief has been obtained, then once daily for a further 5 days. If no relief to any degree after a few days of taking the remedy, a different remedy should be considered. Those remedies can be used for nausea during pregnancy, during menopause or nausea of any other aetiology. 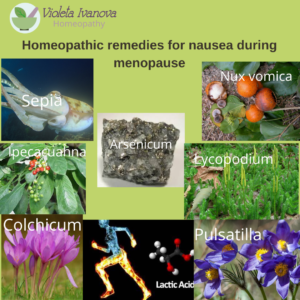