Mould can cause Candida overgrowth

Mould is a frequently overlooked problem that can cause candida. Mould will hurt the immune system by suppressing it. Homeopathy can help getting rid of the toxins.

Many people improve once they moved out of their house. Think about carpets, rugs, and walls in bedrooms, kitchens, and bathrooms. Sometimes mould is obvious on walls or ceilings, and sometimes it is not. If you have a mould problem, it will continually send microscopic spores into the air you inhale.
The way that moulds exposure works to allow the Candida to grow out of control is complicated and serious because it involves the entire immune system being compromised.

To learn how homeopathy can help you, book 15 min free chat now.

Normal antibody production is impacted and decreased if someone’s body is overproducing fungal antibodies at an extreme and chronic level, especially if they live in a mouldy environment. This can lead to immune suppression for everything else and is precisely why people living in mouldy homes or working in mouldy buildings experience multi-system symptoms, illnesses, chronic infections. Their immune systems are totally cashed out fighting the mould antigens and have nothing left to sustain strong, general immunity and wellness.
The inflammatory response to environmental mould is overall immune suppression. This is what commonly causes Candida overgrowth in the digestive systems of mould exposure patients. One is a precursor to the other. With the immune system suppressed, Candida can leave the digestive system’s confines to flourish and create symptoms of its own. 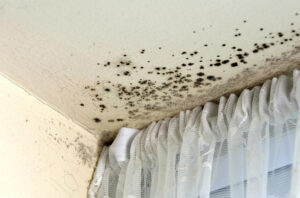 What can be done?
If you suspect that the mould in the house or work is making you ill, firstly try to move out for a month. Then you can see if you are better. Secondly, If it is confirmed that the culprit is the mould, the best is to move out permanently. This is easier said than done, I know. If you can’t move out, try to get the house professionally cleaned for mould and see if this will be enough.

How can homeopathy help?
Finally, once you are out of the toxic environment, you can have homoeopathic detox using a remedy made from a mould. This will help your body getting gently rid of the toxins. This treatment is better done under the guidance of a homeopath. The course will usually take 8 weeks, but it will depend on the case. For frail and sensitive patients, I do the detox over a longer period to spare any undesirable reactions. I usually prescribe other remedies at the same time to help to restore the gut and to boost the Immune system. The treatment is tailored to the client’s symptoms and is individual.